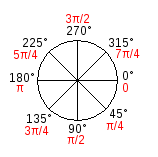 Since most people think in degrees, Processing has a built-in radians() function which takes a number of degrees as its argument and converts it for you. It also has a degrees() function that converts radians to degrees.